I know - 2 post in 2 days! Not possible...something must be wrong...and there will be more! Imagine that! I guess I am reading WAY to many quilting blogs...but it is SO unlike me!

So this is K A&S part 2 - where I document my second dish called: Bārida of Puree of Chickpeas with Cinnamon and Ginger.

This was my second cooking entry into the competition. It is like a lighter version of hummus, as you will see below. 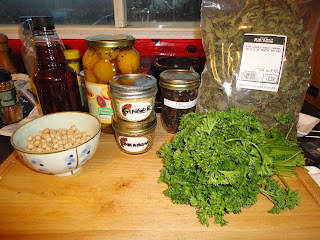 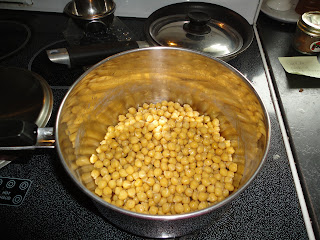 I started by rinsing and cleaning the chickpeas. I then did the quick soak method of boiling them of 2 minutes and letting them sit off the heat for 1 hour. Once this was completed I changed the water and filled the pot again to start the cooking process. I cooked the peas for about 2.5 hours on a low simmer. 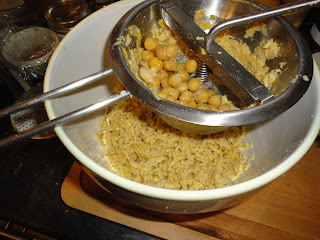 Once the chickpeas were cooked I then rinsed them and prepared a bowl with a food mill to get the chickpeas in a uniform size to create the appetizer.

Once the chickpeas were mashed down to the smaller size, I measured out 2 cups of the chickpeas; I then selected 3 pickled lemons and juiced them.

I then added to that juice ¼ cup of red wine vinegar. I added this to the chickpeas and I then added 2 large pinches of cinnamon and ginger along with 5 black peppercorns and a small handful of dried mint. I put all the ingredients in my mortar and pestle and ground them to a nice fine powder. I then added this to the chickpea mixture. I noticed that it seemed a bit thick for a hummus so I added 1/3 cup of water to smooth it out a bit. I then added a small bunch of fresh parsley to the appetizer. Once this was mixed I covered it with plastic wrap and put in the fridge for the flavours to mix together. 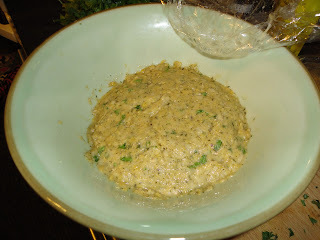 I then quarter a pickled lemon, ground more spices and selected the olive oil and chopped the fresh parsley I wanted to use as garnish. This was added at the event before I serve it to the judges. I also served it with pita for dipping.
﻿

A very simple dish with nice taste. Next time I want to pickle my own lemons and get the chickpeas even finer than what I had originally done. I will also look at the comments that come back to me from the judges too.

There you are my Kingdom A&S entries. The Next post will be about my quilting bee where I have been a bad bee member...stay tuned!

Posted by Erin T./Emelote of Calais at 11:09 AM No comments:

I am very pleased that I have manage to post this next part a full 6 days from when I seem to normally post! YAY me!

So in this post I promised to talk about my A&S entries for the competition we had on November 19th in the Canton of Greyfells (Kingston, ON). As you might have seen on my blog for some time I had what I was working on for my Kingdom A&S entries. I had decided to put in 5 pieces, but not do the Pentathlon! Which was good because a friend won it with her fabulous nettles work! YAY!

So my entries were as follows:

The Tudor gable hood was completely done by hand and I had made it for TSivia's Pelican elevation. It was really nice to have people ask questions about it. I do believe that I have pictures from earlier posts with it on. I have had it for a while, but it was nice to get some comments on it. I am curious to see what those will be exactly (they should be coming in the mail soon!).


My second piece was Takahiro's Kosode, Hakama, Dobuku. I will try and post a picture of him in his Garb, but I wanted to hear if there was anyone who could give me more information on to how to push this to the next level.


My Bobbin lace was truly a beginner entry, as this was the work I had done at my Pennsic class this past year. I like how my stitches are becoming more solid and done properly. I got some great suggestions about how to make a new pillow and Siglinda suggested we meet up to chat about lace as that is her specialty! Yay, someone in town to chat with. Hopefully in January I can do that with her, time to focus on some project! LOL.

Now on to the two dishes I had lots of fun doing - but they were time consuming. This is where all my pictures come from on this post! hehe...

My Arabic Chicken Dish called Another bārida from the book of al-Wāthiq.
﻿

I wanted to do a recipe from the Annals of the Caliph’s Kitchens Ibn Sāyyar al-Warrāq’s Tenth Century Baghdadi Cookbook. I am very curious of Arab cookery in medieval times and I wanted try out some new recipes. So I decided that I wanted to do a cold meat appetizer as this would be easier to transport to the A&S competition. I hope to add this recipe to my repertoire.

Mustard
4 tsp Yellow Mustard seeds, 5 tbsp of White Wine Vinegar, 3-4 pieces of saffron, ¼ tsp poudre douce.
Byzantine Murrī
I started out by placing all my necessary ingredients together and pre-measured. I then heated up the small fry pan with the honey. I heated the honey on med till it boiled then I removed the pan from the heat and let it cool 5 minutes. I then reheated the pan again and brought it to a boil. I did this 2 more times as the recipe requires the honey to taste scorched.

I then toasted the slice of bread in the toaster so that it was almost black. Once the toast had cooled I pulled it apart and put it into my mortar and pestle and crushed the bread to breadcrumbs.
﻿ ﻿﻿﻿ ﻿﻿﻿﻿

﻿
I then toasted the anise and fennel seeds on the stove in a small pan. When toasted they were added to the mortar and pestle to be ground with the ground walnuts and celery seeds. Now I was waiting for the honey to be done, once it was ready I moved the honey to a medium sauce pan and added the water and salt to the pot. I wanted to dissolve the salt and honey before I added the rest of the ingredients (except the lemon).

﻿﻿﻿﻿
Once they were dissolved I added the saffron and Carob powder, then the rest of the spices, the walnuts, breadcrumbs, starch and pears. Now it needed to simmer for about 2 hours. I stirred the pot regularly. Once it was ready then I removed the pot and put the sauce in a fine mesh sieve and pushed through the pear and any little pieces of spice and nuts. Back on the stove it went and I added the lemon juice. It simmered for another 30 minutes. I repeated this process 2 more times. The murrī was ready.


﻿﻿﻿﻿
Medieval Mustard
I measured out the mustard seeds and placed them in a glass bowl and added the white wine vinegar and covered them with plastic wrap to soak overnight. In the morning I drained off the excess vinegar (but kept it on hand) and put the seeds in my mortar and pestle. I then proceeded to mash the seeds into a grainy mustard texture. I then added some of the vinegar to get it a little more sauce like. I then added some saffron and poudre douce to flavor the mixture. I then set it aside to continue the sauce for the chicken.

Poultry Dish
I took 2 chicken breast with the bone in and salt and peppered the breasts before I placed them on the Barbecue. Once they were at the correct temperature I then removed the breasts and let them stand for about 5 minutes. I then removed the bone and sliced the breasts into a reasonable bite size. I then placed them in the refrigerator so that they would cool and be ready for transport to the site.
For the sauce I took the mustard and added 2 tsp. of murrī and 1 tbsp of sugar to get a nice sweet sour taste. The mustard also has quite a bit of heat to it, so it made a nice combination. I then added ground walnuts which thickened the mustard quite a bit and then I added the ground asafetida. I then put this mixture in the fridge so that the flavours would meld nicely.


~Em
Part 2 coming shortly - Arabic Chickpea with Ginger and
Posted by Erin T./Emelote of Calais at 3:55 PM No comments:

Promote Your Page Too

Erin T./Emelote of Calais
Lady Emelote of Calais is a member of the Society of Creative Anachronisms in the Kingdom of Ealdormere and calls the Canton of Harrowgate Heath home. Emelote enjoys researching and re-creating clothing of various eras and loves to discover new (and fun) ways to create the whole outfit. She also loves cooking in the kitchen to figure out how to create the most delicious feasts she can. In real life my name is Erin Thornton and I love history, sewing, cooking, lacemaking and I am starting to quilt. I am married, we have a daughter and two cats.